What food do you take on flights?

Later this week I will fly from Phoenix to Montreal, lifting off at 6:45am with a tight layover in Chicago and arriving in Montreal just before 5pm.

Because of the early first flight and short layover (and good chance of delays), I’m thinking of taking food with me that I can easily eat in my seat without annoying the people around me.

Do you take food on flights? If so, what works well?

Thanks for your help!

We find that hot pizza creates the most envy… for some that may come across as annoyance … but don’t let that stop you … your immediate seat mates will be more grateful and understanding if you share, so get a large, and don’t worry, when folded in half the box fits in the carry-on size checker at the gate, so gate and flight attendants are guaranteed to not give you any grief!

Of course, that departure is a bit early for pizza, so a good morning plan could be granola bars and grapes or apple slices … we do that on the rare occasion my wife puts the kibosh on the pizza idea … well TBH …I actually haven’t convinced her that’s a good plan yet, so please let me know the results if you follow Plan A!

I make sandwiches with fillings that can be frozen. I take them out of the freezer just before I leave home so by the time I want to eat them they have defrosted. Also take grapes.

When I bought my own food on flights, I often took fruit, nuts, cheese, crackers, and/or a sandwich. Usually some chocolate or sweets of some sort.

I find I can’t tolerate any kind of food on long haul flights anymore so I mostly fast now, and sometimes eat a little plain yogurt (which I buy post security), apple sauce (baby food style in less than 100gram pouches), and Hammer running gels which are all easy to digest.

This reminds me of the “banned ham sandwiches” between UK and France when Brexit came into play. It’s very disappointing that we can’t bring cheese from England to France anymore… much as I love French cheeses I crave a good piece of cheddar now and again!! 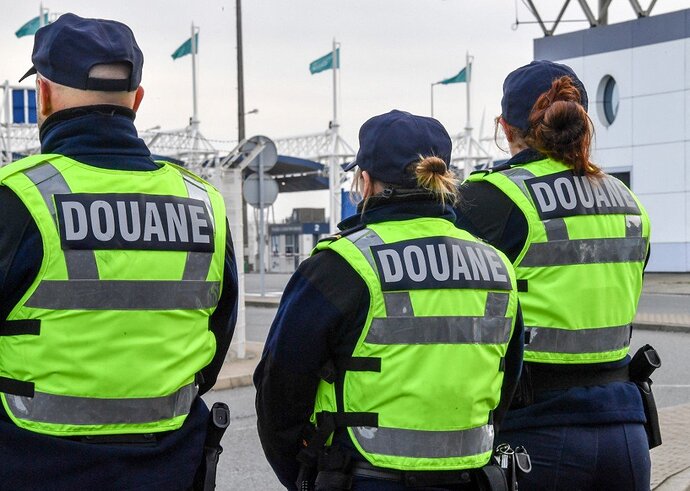 Bovril, tea… ham sandwiches: What can you bring back from the UK into your EU...

It's not unusual for British nationals resident in Europe to slip a little taste of home into their suitcase as they return from trips to the UK - but some of these treats are now banned since Brexit. Here's a look and you can and can't fill your bag...

We’ve had a few near misses… once with ginger (somewhere in South America… can’t remember where) which we’d forgotten (we have every day in tea) and another with a forgotten, uneaten banana found by dog sniffers in Oz. Neither resulted in a fine but a very stern telling off at immigration. Australia are really tough on this and other organic products… even wooden puzzle gifts which didn’t get Ian’s first entry to the country as a citizen off to a particularly good start. I can understand though… I think the lesson was well learned with cane toads

@Karen-Moderator in your situation we usually take a mix of unsalted nuts… almonds, walnuts and dried fruits… easy to graze on, healthy and non-dehydrating, but also disappointing when they announce that there’s a person onboard with a nut-allergy as happened twice on recent flights! So may have to rethink my strategy!! We don’t eat sugary products so it’s tough… fasting maybe the way for us too if we take an early flight.

I haven’t flown much in the past 2 years but when did they start announcing nut allergies on flights? Which country? Does this mean you can’t eat nuts if someone else on the flight is allergic? I’m very intrigued as I always have nuts to snack on

@Vanessa-ForumCMgr I have also been through the uneaten banana scenario and I should have known better flying long haul pretty much every week!

… but hey ho these things happen to the best of us.

@Mslaura I don’t know if this is on all flights … Ours were on British Airways 12 hour flights and we were asked not to eat any nut based snacks that we may have bought onboard as there was a passenger with a severe nut allergy. We thought it a little odd but put this down to fragments in the air system? I’m guessing the “severe” allergy maybe was the contributing factor. He/she was on both our outward and inward flights it seems or maybe it was a flight attendant. @Julie-Moderator may know the answer to this or under what conditions this would apply with her current flying experience.

@Vanessa-ForumCMgr @Mslaura With British Airways if a passenger reports they have a severe nut allergy then flight attendants will make an announcement saying you cannot eat nuts. I can confirm this happens rather frequently unfortunately and has been for some years.

This has become something announced on most any flight regardless of airline or country in my experiences on a multitude of flights if there is someone at risk on board.
I have also noticed that there is now a place to indicate if one has any allergies or special needs when making a booking which I think is wonderful.

The flight I took last week was delayed in both cities by a combined total of 3 hours so I was glad to have packed snacks and drinks. I am trying to reduce carbs so had packed some low carb protein bars, low sugar chocolate bars, and a squirter bottle of flavouring for water. I ended up eating a bit of all during the waits. It definitely helped not to be hangry😄. The most important part is that I only bring unopened, pre-packaged food so border patrols are not as concerned.
Just FYI, I also pack some oatmeal single serving packages to tide me over at a sit if I don’t get to a grocery store right away.
Hope this helps.

@Amparo On my wish list would be to get people to realize not to wear heavily scented products on a flight. For me those are difficult to tolerate and you’re in such close proximity on a plane and can’t just distance yourself.

Water. I always refill my large water bottle after security and make sure to keep hydrated. I usually have a granola bar in a pocket and some fruit. And sweets that can be sucked to stop my ears popping.

I can not equalize my ears when landing & end up in agony without ear plugs. The Haribos & starburst jellies are just a back up

I cannot travel far without food so we have sandwiches, fruit and a bag of nuts and water.
We usually eat it before boarding a flight.
On our last flight we went through the many lines waiting for security check. After going through this Mr Itchyfeet suddenly realised his rucksack had gone. It had disappeared down another security aisle. Another endless wait until a security man searched it. The problem was that there was an apple in the bag. It must have looked like a bomb during the xray.

Just be careful with what foodstuffs you take with you into another country.

Very true. I had bananas in my backpack when we flew to New Zealand. I ate them on the plane but when we landed, the sniffer dogs could still smell them and I had to empty my backpack at the airport to show I didn’t have any fruit. NZ also has very strict rules on what you can bring it. However, they do give you an opportunity to throw it away before you go thru customs.

I haven’t flown much in the past 2 years but when did they start announcing nut allergies on flights?

In the last 5 years, I’ve only been on one flight where they announced someone on the flight had a nut allergy. We were happy to oblige rather than risk the chance of having to turn the flight around if the person had an anaphylactic reaction.

I have a friend whose nut allergy is so severe that they can have a reaction to the smell of it, or it they touch something that someone else has touched (ie the bathroom door).

I have a colleague with a severe nut allergy. Just opening a nut product can cause particles to become airborne and affect her. She wouldn’t be able to be in a room where opened nut product had been, and could get a reaction from someone who had eaten nuts in the staff room and then returned to where she was working, unless they had thoroughly brushed their teeth.

She was ahead of the game when covid came along as she’d been wearing a mask on public transport / in enclosed public places for years!

@BruceT … somehow I agree with your wife!