"Once you have tasted flight, you will forever walk the earth with your eyes turned skyward, for there you have been, and there you will always long to return.” Leonardo Da Vinci. 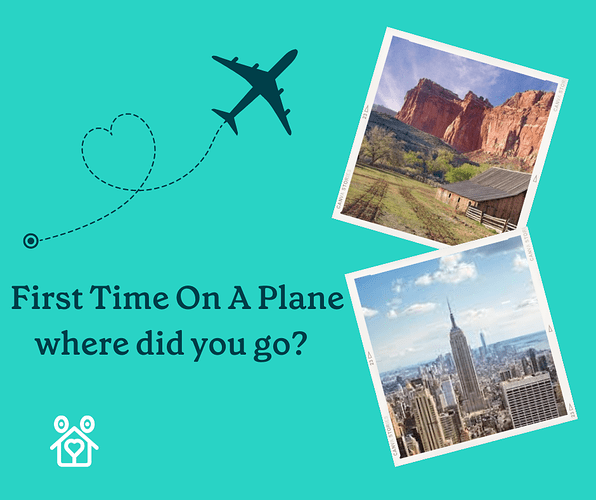 I was in my 40s and flew to Cyprus for a holiday in the sun. I was so nervous the lady next to me held my hand most of the way. I was travelling alone after a major relationship breakup and this was the start of my new life. And what a life it’s been!
Before that, holidays were always spent in the UK exploring our beautiful country in a caravan or tent.

We flew to Daytona Beach when I was 7. And that is when my love for all things aquatic began. I have zero memories of Disney World, but can clearly remember the sand dollars, sea urchins and crabs we found on the beach. There’s something about an ocean breeze that is so incredibly calming.

We flew first to Jersey when I was a teenager … a family holiday in summer. No idea who the carrier was now but it was a propeller plane (that’s showing my age!!), from Southampton airport! My brother and I were incredibly excited, while my mum was terrified. I had nail indents in my hand for the rest of the day as she held on firmly to me throughout the short flight. But then there was no stopping her… she got a real buzz from flying! Ian has just started having flying lessons, so no doubt at 85 she’ll be requesting a flight with him next year when he gets his license!!

My first flight was when I was around 12, on a Douglas DC-3 (Air Rhodesia in those days) from Livingstone to Salisbury. I remember being soooo excited and my mother being soooo nervous and smoking non-stop. I do remember rattling around a fair bit!
Gosh, amazing to think back, that smoking was allowed in those days!

3 months old. Manchester to Nassau with my parents, probably on British Airways. Apparently I screamed for the entire 12 hours - apologies to anyone who may have been on that flight!

I flew to Spain with my parents at age 8 or 9 - probably from Manchester. I’m sure the experience was very exciting but I have no clear memories of that particular flight!

I was 11 years old (about 60 years ago - 1962) and flew with my grandfather to visit cousins - red eye from New Orleans to Chicago - making 3 stops on the way - New Orleans to Jackson, MS to Memphis to St Louis to Chicago Midway. Delta Airlines with propellers - DC6 or Convair 440?
I don’t remember much.
The next summer I flew on my own to spend the summer with cousins in Brooklyn. Don’t remember anything of the flight - but I was 12 and there was none of the unaccompanied minor business.

I was such an excited child in the 70s.
Fkew to Guernsey from the Uk which then involed 2 flights, the first to Jersey & then a tiny carrier plane from Jersey to Guernsey.
I only remember being excited & it all bein a new experience from the airport onwards.

I think it was an RAF flight (limited mod cons…) as we were joining my dad who was in the navy and had been posted to Singapore. According to my mother, she was asked/told to split our carry-on into three bags. She suggested they find a way for one person to carry a baby, hold hands with a young child and carry three bags, and she’d then consider their request

As an 18 year old newlywed/military dependent, I flew to Nuremberg, Germany with Roger. We lived there from 1978-1981, and I jokingly referred to it as our ‘extended European honeymoon’ We easily acclimated to our life overseas, and our love of travel has been going strong ever since!

My first flight was when I was 10 (unfortunately a whole number of decades ago) to one of the canary islands (can’t remember which one!). I’ve flown hundreds of times since for both work and holidays.

My grandparents lived in Los Angeles. We lived 3,000 miles away in Ohio. When I was four my grandparents paid for all six of us to fly out to visit them. I was so excited to visit the place where TV shows were made. And I was mesmerized when I looked down at the ocean from the air. Wow. This was the life!

Then the plane (TWA) banked to land. I was so afraid we were going to slide off the runway into the ocean, I was white as a ghost until we came to a full stop! And I threw a fit when they had to get me back in a plane to head home! Needless to say the next time we went to California we took the train.

I spent the entire flight convinced I could smell burning and that any minute the plane would explode, I was never more glad to get back on Terra Ferma.

1967 BOAC exLHR to JFK and onwards to Barbados. I was a serious 4 year old who politely stopped a crew member to ask what time was lift-off. She told me it was a plane, not a space rocket!

My first time was aged 7, as an unaccompanied minor! A domestic flight in South Africa to spend the holidays with family…so much fun, I never stopped flying!

Not first flight, but a bit different -
Started trip home from a Friday Harbor, WA sit last fall in a Kenmore Air Cessna 208 - 8 passengers, 2 pilots, 1 engine.
Took off from Friday Harbor, then 5 minutes to East Sound, then 40 minutes to Boeing Field.
I got to sit right behind the pilot. 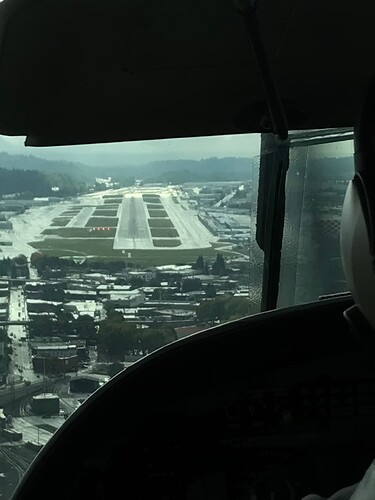 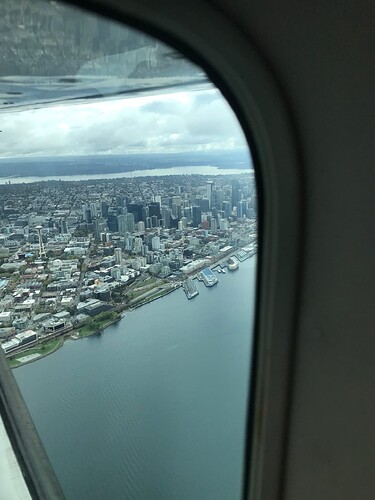 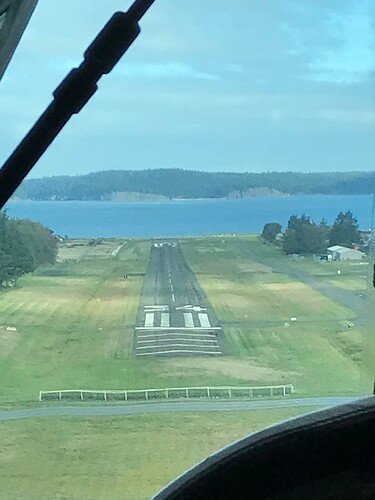 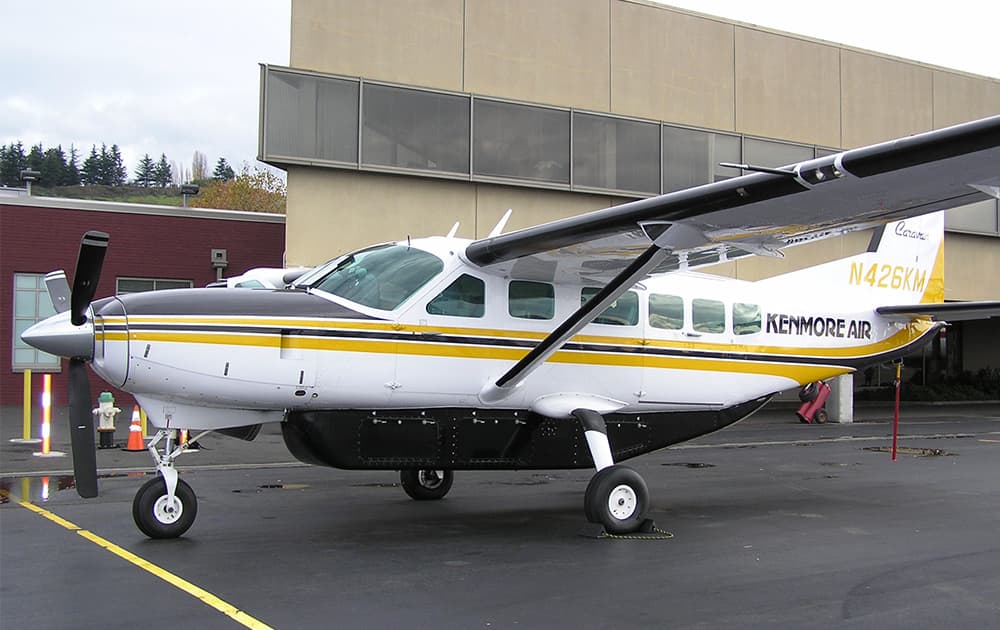 I’ve flown too many times to recall since age 10 – in aircraft both large and small; in jets, piston-powered, and helicopters – but will never forget this flight 3 years ago. It was my first solo. That’s Mt Hood, Oregon (USA) in the background. 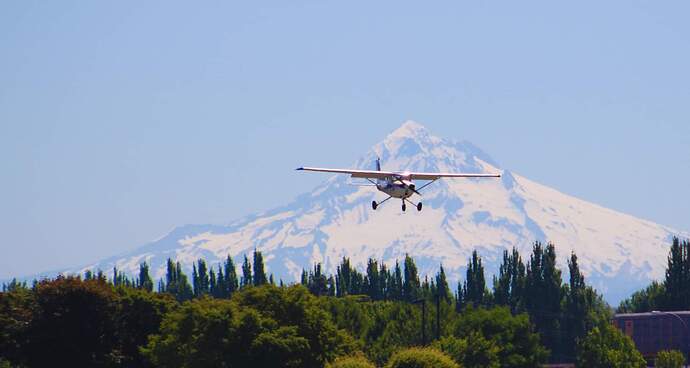 I’m trying to remember when my first flight was, I think I was already married and possibly had a child.
We traveled a lot when I was a kid but not past the nearest state or province and always by car.
We used to sleep on the floors of friends and family homes that we were visiting. Sometimes we’d sleep in the back of the vehicle if we were on some gravel road on the way to somewhere, of course this was in the 60s and 70s. It usually took a lot longer to get anywhere in the areas we were.
Things have changed a lot since then! I have flown to many countries and multiple continents since my first flight.
I tend to be a homebody, but I Love doing local exploring wherever I am, hang where the locals are. I’m really not a touristy tourist. Right now I’m just focused on local sits, but I look forward to maybe stretching my wings and taking a flight somewhere else to do a sit.

@Angela-HeadOfCommunity my very first flight was when I was 24 years old. I was working in Chattanooga, TN, USA and was getting an opportunity for a promotion at various locations throughout the Country. My first interest was Colorado, USA, so I boarded a flight there…not knowing anything about the state or City of Denver…just knew it sounded good,…LOL

I was by myself on the flight (which I think was Republic Airlines) and found flying to be so exciting. That was LONG before I had to start flying for work all the time and found it to not be as much fun as I thought!

Now that I only fly for pleasure again, I love going to new places, seeing all the sights, and learning about different cultures…