SWAMPSCOTT, Mass. (AP) — Coyotes surrounded a person walking their dog north of Boston over the weekend but were apparently scared off by police cruisers that arrived to help, authorities said.

Police in Swampscott received a call around 9:30 p.m. Saturday from the dog walker, who said that they were surrounded and that the coyotes were “not backing down,” police said in a Facebook post.

Officers counted at least nine coyotes. They retreated after the arrival of cruisers with their lights flashing.

Police escorted the dog walker and their pet to their home with no additional danger.

Police also posted tips from the Humane Society for how to deal with bold coyotes, urging residents to be aware of their surroundings when walking their dogs, especially in the evening, when coyotes are most active.

Police also recommended that people bring noisemakers, squirt guns or pepper spray with them to scare coyotes away.

Wow, that’s so scary. Thanks for sharing. I used to live near there and I have been thinking a sit there in the near future would be lovely. Won’t be walking the dog in the late evening, though.

Thank you @mars it’s always wise to be aware of the wildlife in these areas, we had bears in abundance in BC. Canada. 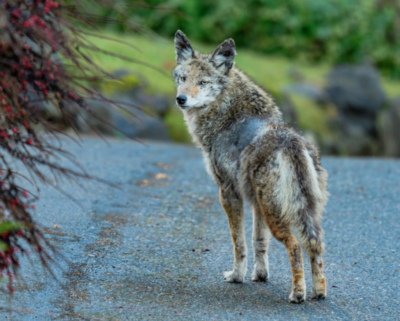 Learning to live with coyotes: Tips for keeping pets and people safe - My...

Early one morning several years ago, Edmonds resident Maggie Peterson let her 25-pound Boston terrier out to wander in the family’s fenced back yard so she could relieve herself. It was their normal routine to start the day, but that was about to...

Thank you for sharing! We have coyotes where we live so we tend to do our evenings walks before it gets too dark to avoid any situation like this…they had killed one of my neighbors dogs a few years before I moved to my neighborhood. So sad but good to be aware of for homeowners and sitters alike!

Oh my. I just finished a 10-day sit in the mountains of North Carolina where I walked the two dogs up and down their steep mountain road each day. A neighbor told me that a black bear (“prolly 300 pounds”) had walked through his yard the day before, at the same time I was walking the dogs! I always carry mace but was hyper vigilant each day after that when I walked (and more than a tad jumpy every time the wind blew).