Must Sees Around The World - Part 1 - The Grand Canyon

There are just so many “must sees” around the world that we will probably not get to do them all. However one that we have been fortunate enough to visit several times and one that you should put on your bucket list if you haven’t already is The Grand Canyon, one of the Seven Natural Wonders of the World. Totally within the state of Arizona, 277 miles long, 18 miles across at its widest point and over a mile deep (6093ft, 1857m), it exposes over 2 billion years of the Earth’s geological history. It shocks you with awe when you first view its beauty. We were quite literally stunned in to stillness and silence when we first gazed upon this deep gouge in the earth’s crust. From each and every viewpoint a new vista reveals itself to expose the canyons stunning beauty. 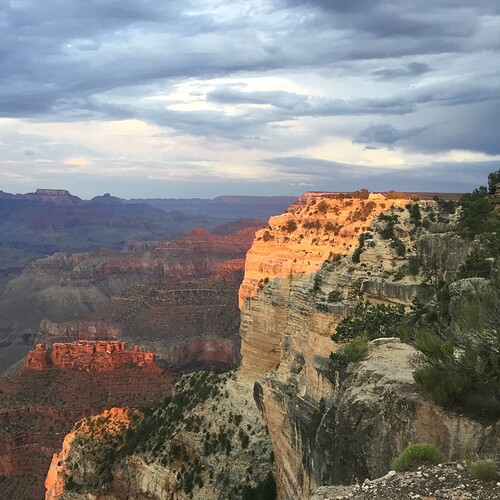 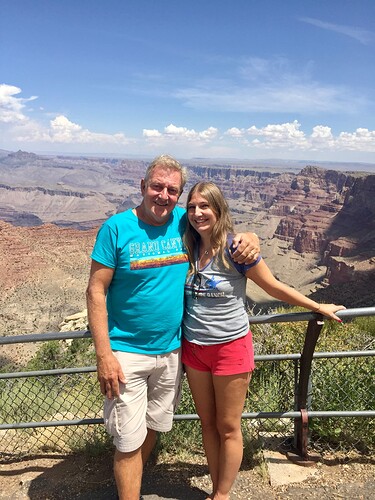 Most tourists only visit the South Rim of the canyon because this side is where the Grand Canyon Skywalk, Grand Canyon Village and the Desert View Service Area are located. Despite its length there is only 23 miles of road that actually runs along the South Rim and that is from The Grand Canyon Village to the Desert View Service Area. There are trails along most of the rim but not roads. The Grand Canyon Skywalk is a horseshoe shaped bridge made of glass allowing visitors to walk 4000ft above the canyon floor. It is located in the Hualapai Indian Reservation in the western area of the canyon and these native Indians own and run the establishment. It is about 2 hours and fifteen minutes drive from Las Vegas or 4 and a half hours from Phoenix. It is quite surreal to walk out on this glass bridge and look down to the canyon floor 4000ft below. No cameras or mobile phones are allowed out on the bridge as the photo opportunity is a means of allowing the Indians to enhance their income. There is very little accommodation in this area so it is more of a day trip. 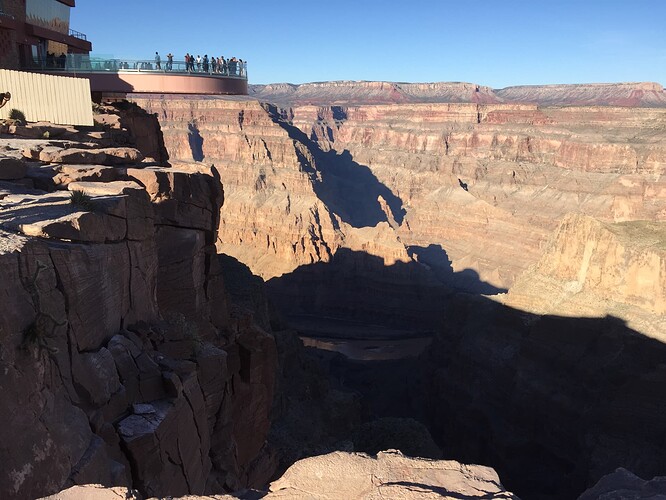 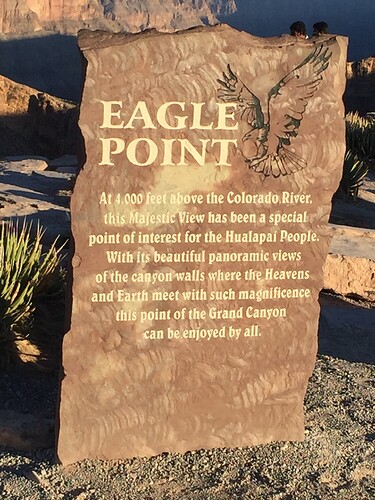 The main centre for tourism on the South Rim of The Grand Canyon is the Grand Canyon Village and is where most visitors head to admire the canyon. It is 4 hours and 20 minutes from Las Vegas and 3 hours 35 minutes from Phoenix. It is run by the National Parks Service and is where El Tovar, the first hotel to be built on the canyon rim in 1905 is situated and we stayed in this historic hotel on one of our visits there. Now the village consists of a multitude of different types of accommodation all of which can be booked through the National Parks Service website. The village extends over some distance now but there are frequent buses around the village and to various viewpoints around the rim. There are several restaurants and at least two supermarkets in the village. The village is also where one of the most famous trails in the park starts, the Bright Angel Trail. Naturally, as you would expect, the trail starts off very steep and follows a side canyon along a massive fault. As you descend the gradient flattens somewhat to a point known as Indian Garden, 4 and a half miles and over 2000ft below the rim. This area was used by native Indians until modern times. From here it is a relatively flat 3 mile hike to Plateau Point, 1600ft above the Colorado River. The hike is not really for the casual walker because what comes down has to go back up! It is ill advised to attempt this trail in the height of summer, as temperatures even in the shade can exceed 100 degrees Fahrenheit (38 degrees Centigrade). There are water stations along the route, the last being at Indian Gardens before Plateau Point but in the summer exposure to the sun and dehydration are an acute reality. 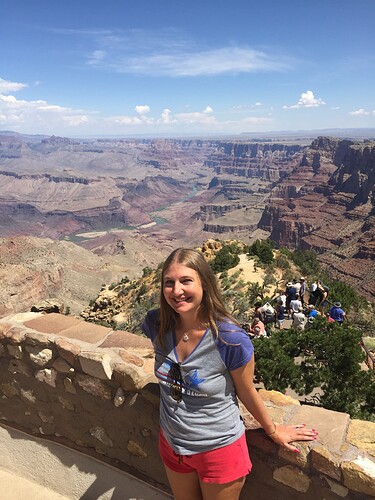 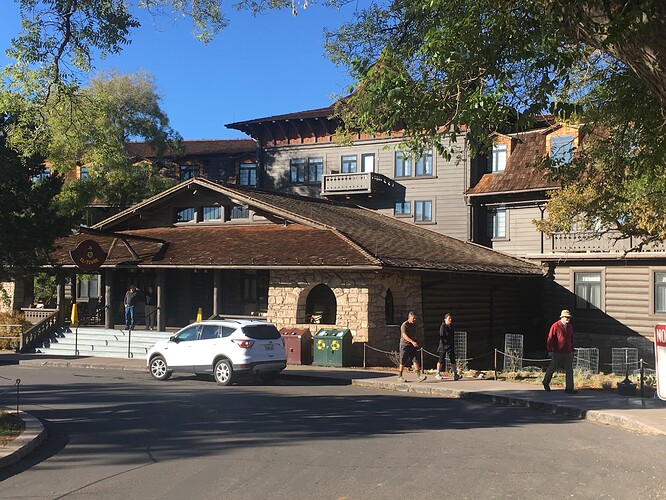 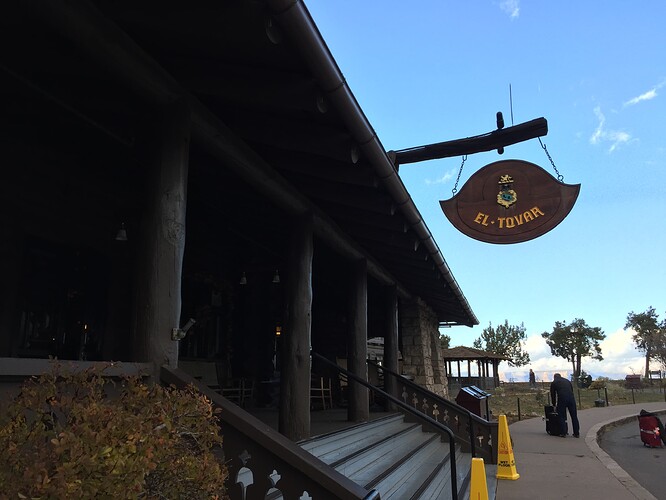 If you cannot get accommodation in the Grand Canyon Village then there are many hotels and lodges in the small town of Tusayan, only 12 minutes drive south of Grand Canyon Village. This is also where you can get a helicopter ride from Tusayan Airport with Papillon Helicopters, an absolutely amazing experience and a wonderful way to see the canyon from a different perspective. We did the North Canyon Tour and to ensure that we had the two front seats next to the pilot we requested them on arrival and paid the $100 excess to ensure success! It may sound expensive but by goodness it is so worth it! After lifting off from the airport you fly low over the forests that surround the canyon oblivious to its existence whilst listening to Ride Of The Valkyries. Suddenly, when the music reaches its crescendo the ground falls away and you are flying over the void of the canyon, surrounded by its walls. It is one of the most awe inspiring experiences that we have ever had and worth every dollar. Our only disappointment is it doesn’t last long enough but there are several other tours also available with Papillon. 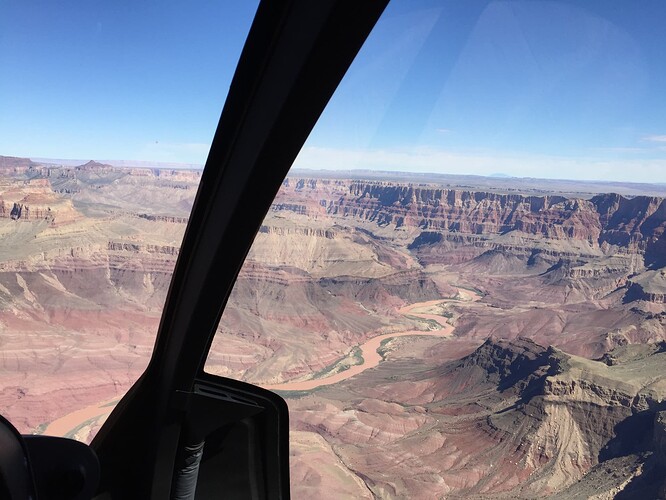 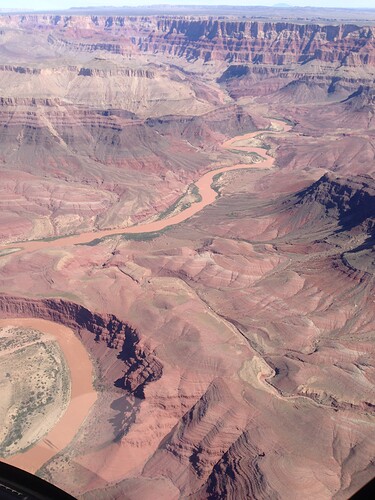 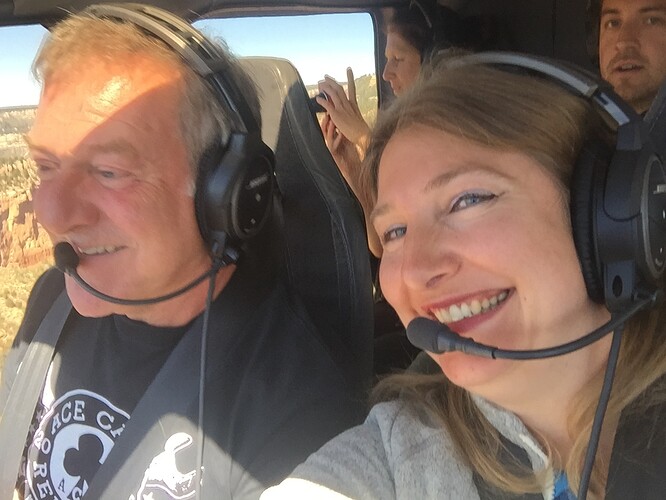 Another way of reaching Grand Canyon Village is by the Grand Canyon Railway. Built in 1901 it provided easy access from the town of Williams to the South Rim, allowing tourists to avoid the 8 hour stagecoach ride from Flagstaff. The railway was instrumental in the creation of Grand Canyon Village and the increased number of tourists provided by the railway led to the building of the El Tovar hotel in 1905. 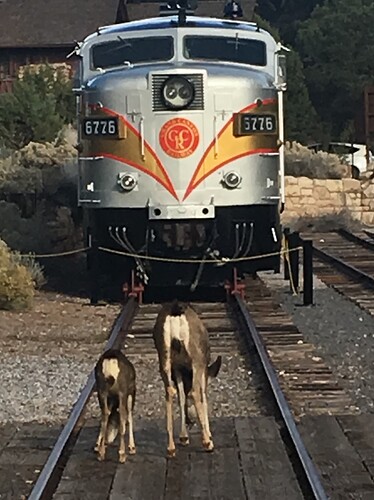 As stated earlier there are only 23 miles of road that closely follows the rim of the canyon between Grand Canyon Village and Desert View Service Area. It does permit access to a number of beautiful viewpoints along the way, one of our favourites being Grandview Point, if you are lucky enough you may meet some of the local wildlife that inhabits the Grand Canyon National Park. On one of our trips our progress was halted by a herd of elk, a male and his harem plus young. It was a beautiful sight to just see them wandering around and feeding in their natural habitat. 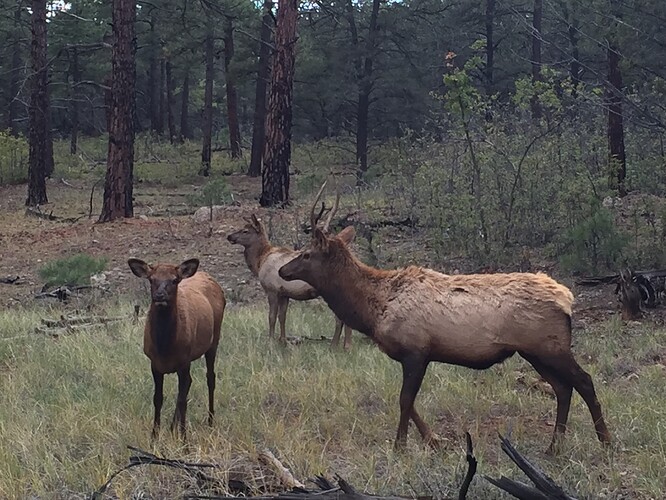 The Desert View Service Area is the last point of interest before driving out of the canyon towards the south east. It is not as large as the Grand Canyon Village but does have a petrol station, visitor centre, two restaurants and deli but most importantly it is the location of the Desert View Watchtower. From here you get stunning views of the beginning of the canyon to the east and can view its progress meandering through to the west. We were very fortunate to arrive here just after a very heavy rain shower had passed through. As the clouds cleared and the sun broke through we took some stunning photos of a rainbow that appeared to loop over the Watchtower and slide down in to the canyon. This area is also superb for just sitting on a rock near the edge and watching the ravens frolicking on the up and down draughts with reckless abandon. 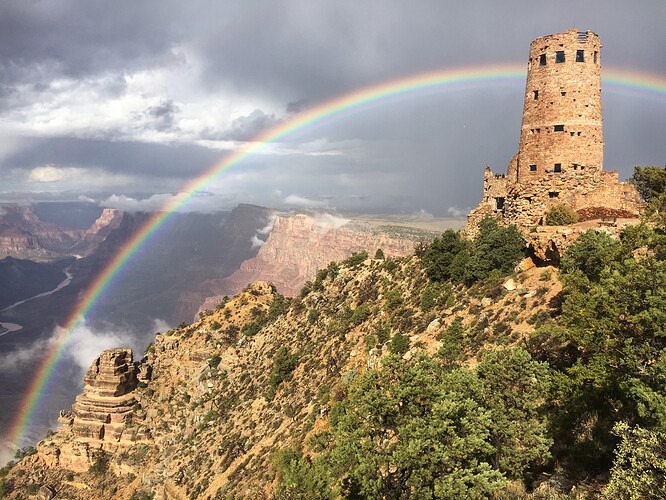 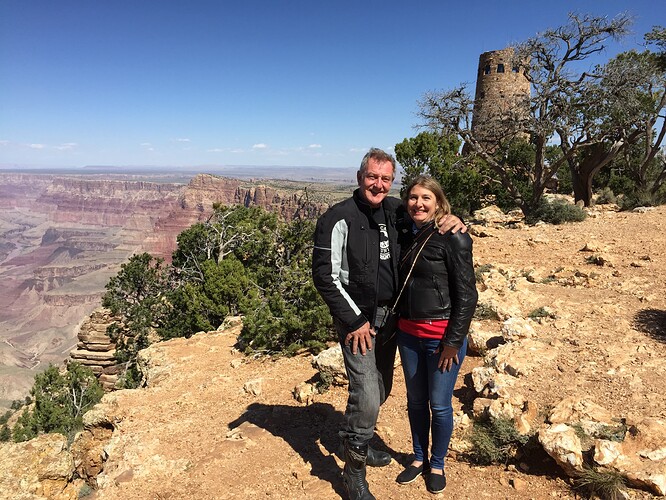 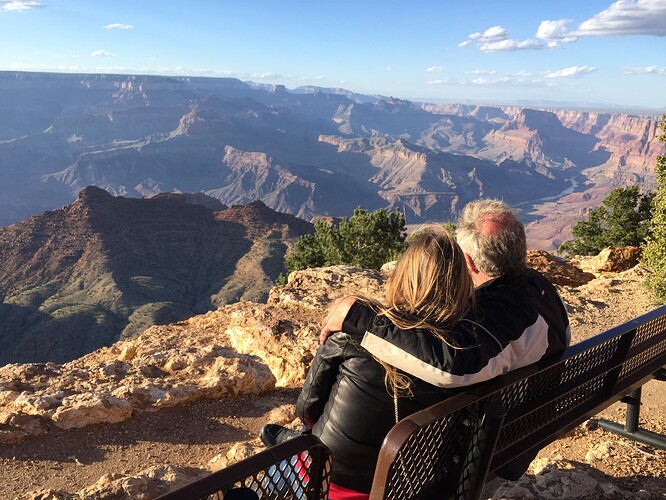 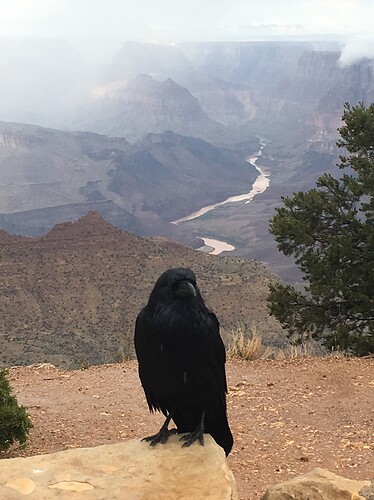 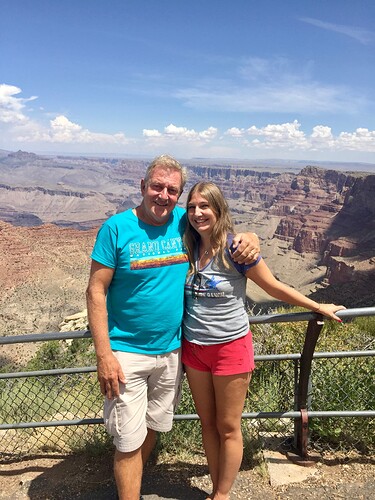 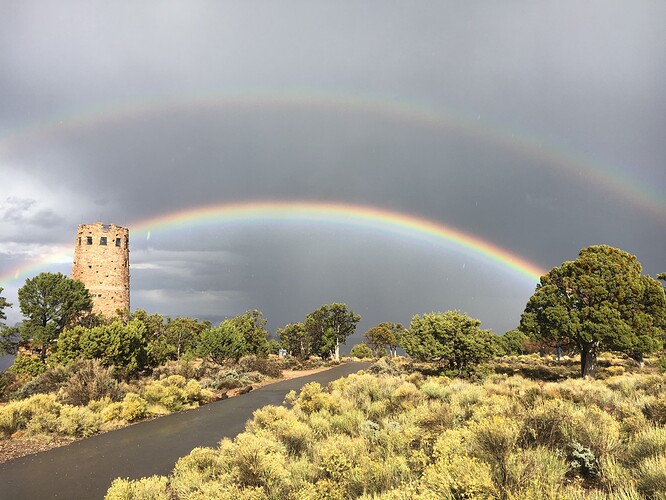 If you have a few days or a week to spare at the canyon there are companies that offer rafting trips through the canyon on the Colorado River. Along the way you will marvel at walls soaring 4500ft overhead, see waterfalls, Indian ruins and commune with wildlife.

Can anyone else add their “must see” to the list?

Absolutely stunning pics! They are like professional photos. It is funny, I live in the US, lived so close in Colorado for 25 years and never made it there, but it is on my bucket list when we travel back out that direction. My grandson (who was eight at the time) sat and cried at the beauty. His other grandma had taken them a few years ago and she said he was in total awe of it.

I think we always take so many photos that usually there are a few good ones!

You will certainly love it there

Great article @Samox24 & you clearly love the Grand Canyon. We went a few times many years ago, as “young things”. Stayed in the lodge you pictured in fact. Christmas 2004 I think. The restaurant didn’t accept reservations (weird), so we went down to see how long the wait was. 4 hours. We had Pringles and processed American cheese for Christmas dinner that year. Amazing what one will put up with when young. All part of the tapestry I suppose and it didn’t make the canyon any less fabulous. The next time we went they closed all the state parks for a strike

. Still the canyon was breathtaking. The next time, it snowed so much (in June!) that we couldn’t leave. I wonder what it would do to us if we tried to go again?
Can’t decide what to list as my “must sees” yet…

What a great, informative post @Samox24! And I too must rave about your pictures – they’re beautiful! Thanks for sharing this and starting this conversation.

Now, what other amazing places should be on this list…? There are so many…

@Karen-Moderator that is so true. I had enough trouble just deciding where should be Part 1!

Absolutely stunning @Samox24.
My first time to the Grand Canyon was part of a family holiday and we did not plan well spending only 4 hours there!
It was for me the first time I was truly overwhelmed by the vast beauty and magnificence of this Earth’s natural wonders. It literally took my breath away.
I went back several times, alone, in different seasons for several years. It had such a profound impact, Imoved to Arizona for a few months and spent a great deal of time exploring the North rim and all those beautiful mesas and historical ruins.
Only other place I have ever felt that way was in Snowdonia Park in Wales.
I’ve been there three times now…would gladly go again.
Thank you for this. 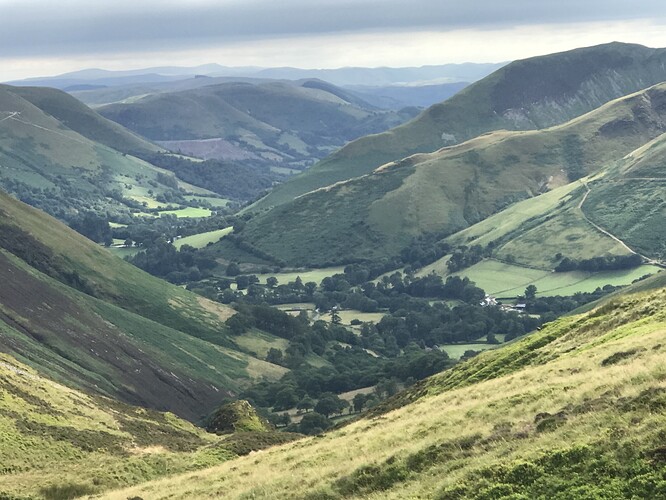 @Amparo I know exactly what you mean, still loads to explore at the Grand Canyon for me, you are right there is just something about this place, it never fails to take my breath away and keeps drawing me back!

It’s humbling. The silence has much to say.
A wonderful reminder.

One more in that area… Antelope Canyon, near Page, Arizona. You can only go with a Navajo guide, as it’s on the Navajo reservation, but there are several guide companies in Page. My photos are old and don’t do it justice! (Now everyone’s going to go to Arizona and not to my housesit in Texas! 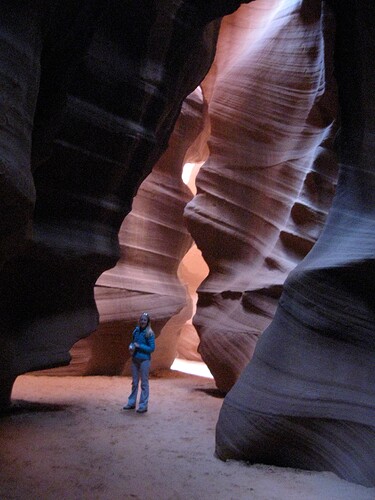 Also, if you’re in that part of the world, you really should go see Horseshoe Bend, too. It’s a 10-15 minute hike/walk from the road (near Page, Arizona), or you can kayak down through it (several local companies will take you and your kayak up to the dam, and then you paddle back down, usually camping overnight one night by the river).

I lived in Arizona for 10 years and completely agree that the Grand Canyon is a magnificent place. Havasu Falls is/are not technically within the Grand Canyon, but they feed into it, and you need a permit from the Havasupai tribe to go there, but it’s so worth doing. You can hike down, camp by the water, and hike back out, or there are mule or helicopter options. The water really is as blue as it is in this photo, if not even better in person. (Note the small person on the far left side for scale.) 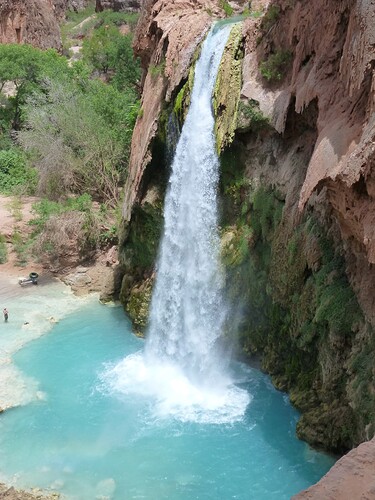 Beautiful pic. I have never been even though I lived in Colorado for more than 20 years. Hopefully will get to see it sometime over the next few years.