Putrified shark in Iceland. Apparently it naturally has a very high ammonia content, so it is buried until the ammonia starts to break down. Then it is served in little cubes on ice. I don’t think they had buried the one I had a piece of for nearly long enough!

I had to giggle, in South Africa they call the combination of chicken feet and chicken heads “walkie-talkies”. It’s made into a stewie-type of dish to eat over cornmeal (like polenta) usually. Street food.

I just Googled “What are the worst tasting foods in the world?” and they are so disgusting (IMHO) that I could not bring myself to share but surprisingly, in amongst these REALLY awful items sits the humble … 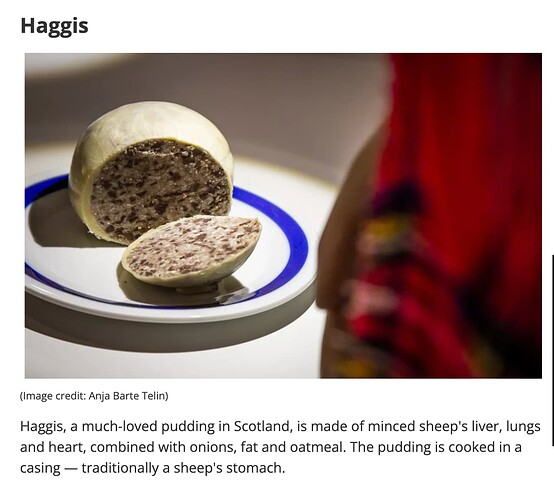 How dare they @Angela-HeadOfCommunity! I’m partial to haggis, in modest quantities.
I think that’s just a list of ingredients that someone finds unacceptable, not a truly disgusting taste. Here in my region of Italy there’s a dish called coratella, which is largely the same meat composition as haggis but comes in the form of a stew. It’s delicious!

@mars That’s probably why they served it on ice!! To hide the smell!

I ordered a chicken dish in Phnom Penh which turned out to be sauteed chicken necks - awful.

We lived in Ho Chi Minh, Vietnam for 12 months in an apartment block with a restaurant, they made THE best Caesar salad I have ever had, prepared at the table, but I digress

One evening we went in for dinner and my husband had not been too well, a cold and chesty cough, as residents and regular diners we knew the staff well and knowing John wasn’t well it was suggested he had the Soup De Jour … Blackened Chicken Soup, Chinese Style, a speciality of the kitchen, the parting remark before delivering the order to the kitchen was, “It will be very good for the chest Mr Laws” Being a non meat eater I declined the day’s “special”

The soup arrived and floating on the top was what looked like a large mushroom, but this was chicken soup, John took his spoon to examine the floating “mushroom” only to discover a whole flattened and blackened baby chick, I wont go into my reaction …

Needless to say he passed on the soup

@Angela-HeadOfCommunity: And we have our winner! No, wait, I did say “tasted” didn’t I? It’s disgusting and makes me shudder but at least @Ksquared did actually taste the Guinea Pig

@Saltrams My hubby also tried the Guinea Pig whilst in Peru and said it was basically similar to eating chicken… I however declined politely!

I find the flavor of pine to be very interesting!

I first discovered the Greek wine retsina, and now I even have some mastic in my spice drawer.