Owners without reviews from previous sitters - a concern?

Hi there, I suppose this query could end with asking the owner themselves, but does anybody else avoid sits with owners that has had sitters but they didn’t leave a review? I’m interested in one that’s had two previous sitters but neither left a review, although the owner reviewed them. Both sitters had also left reviews for other owners who they’d also sat for recently. If my application results in a reply, I will probably just ask. As a solo female doing it, and having up until this point done sits for single women or couples, can be never be too safe…hate to say that but it’s true. I’m not overly suspicious of people or wary - I live freely and independently, but yeah. I’m sure some of you will understand.

I feel a move to another, well known thread approaching…

As another solo female, I completely appreciate your concerns. I don’t think the review process for THS is the most intuitive, it seems a lot of reviews end up on Trustpilot. I’m curious to know how you became aware that the HOs left reviews for sitters? This isn’t something I know how to work out. I don’t know that there is a clearcut solution besides gently asking the HOs, but even then, you might not get the whole story. I say use your intuition if you spot any red flags. If you don’t, it may just be that the reviews got lost along the way and the HOs didn’t chase them.

We don’t avoid new HOs but listings with multiple sitters who leave no reviews are not a good sign. It most likely doesn’t relate to safety issues (otherwise the HS would probably report them to THS) but maybe the HS wasn’t too happy about how the sit went and avoided giving negative feedback. PS: We also look at reviews given by the HO to previous sitters, it can tell you a lot!

That’s a tough call. The sitters may just have been super busy and not gotten around to leaving a review. What did you think of the tone and content of the review the homeowner left for them? Any red flags? If not, I would just apply and talk to them. I think a conversation can give you a much better feel for things. If anything feels off during the call, trust your instincts. But I wouldn’t necessarily rule out a sit on the basis of no reviews.

Yeah that’s what one of my hunches was - their nature doesn’t allow them to bosh out a negative review. The negatives outweighed the positives, and they couldn’t leave a review without mentioning that to be fair to any future sitters, so didn’t bother. It’d be ideal if we could message fellow sitters in these cases.

You can click on everybody, that’s if they’re still active. So where you go to feedback and sitters sections in the home owner’s profile, where it pulls up all the previous sitters that they’ve had you can just click on the sitter and you’ll be taken to the sitter’s profile. Yeah, absolutely, it could just be that reviews were forgotten and not pushed for. I do find that odd in general - I’m pretty on it with them because I appreciate what I’m doing and I expect the home owners to be the same.

That would be concerning to me and I would probably pass it up unless it was a very appealing sit for me (location, accommodations, car included, pets and their needs) If you do apply and are selected for an interview. I would do a very thorough vetting through video call, with a view of where you will be sleeping, ask their expectations of you, and give them your expectations of them, check out the location of the home and surrounding area. Then…go with your intuition.

Owner left short and sweet reviews of both sitters and five stars all through the categories - one was very short and the sit was nearly two weeks. Me personally, if things went well, I’d expect more than five words. Hmmm maybe this is an avoid!
(post moderated)

This is an interesting question and here’s my take on it from having done this for a few years now. I’m also a solo sitter so I get where you’re coming from. It’s always far more reassuring for me to see a home owner with at least one good review. In the past, I have gone for a number of sits with absolutely no reviews, they’ve gone really well and in a number of cases have actually become regulars. I did my best to gauge things as well as I could at the video call stage and then went with my instincts. As we know, on the the app, it shows us where an owner has had previous sitters but for whatever reason they have not left a review. From my own experience, I would consider this to be potentially a red flag. If upon further research, I can see those same sitters have happily left positive feedback for other sits they’ve done, then this tends to indicate to me that something may be amiss. I did a sit this year where the owner/pet parent had a succession of different sitters who had not left reviews. Whilst there definitely were good aspects to this sit. It was a nice home, lovely animals etc, I did find the owner to be shall we say not quite as respectful as many others have been. They were expecting me to be on standby for numerous package deliveries, parcel collections all throughout the day just as one example of things I wasn’t happy with. We’re not talking about just the odd package here either! Looking back, if I’m completely honest, I did pick up a bit of a red flag during our pre sit chat but I unfortunately went against my instincts and went ahead. Lesson learned though and I’m far more vigilant now because there’s nothing worse than being tied into an arrangement where you’re not fully happy. So now, I tend to look quite closely at their sitters’ lack of review history as something of a potential red flag and will generally not take things forward.

I am actually wondering the same.

I don’t make it a habit to go through the applications I submitted that were declined, but I did notice that a majority of the ones I missed out on didn’t have reviews from both the sitter and owner.

I dodged a bullet with one HO who was very picky and demanding and didn’t give the sitter a good review as I had applied for those same dates.

I have noticed too that some HO’s who have invited me to sits that I couldn’t commit to also didn’t have feedback of those intended dates.

I edited my question as I meant it specifically to an owner who’s had sitters but they didn’t leave reviews. I’ve done a good few sits with owners new to the site and to having sitters at all. Thanks for your lengthy reply - other members have been great on this post. What was the red flag if you don’t mimd me asking? On re-looking I can see the owner left one of the sitters a 5-word review (positive with 5 stars) for a two week sit, so I’m thinking it didn’t go that well. Long sit to leave 5 words for IMO. Really wanted this one as it overlaps with one I’m on in a location that’s been top of the list since I started.

I had a sitter for a month who although I left a good review didn’t leave one for me. I chased up a review but still nothing. When I posted my next month long sit the same sitter applied and returned to do a great sit. Still no review despite a couple of reminders. This was beginning to make me feel paranoid! However since then we have had several lovely sitters who have all left us wonderful reviews. A difficult situation for us as it looked like something was wrong so thank goodness we have now moved forward.

How rude uh, especially given the length of time and the feeling all went well twice. It’s part of the process and shows a lack of manners to not review.

Thank you that’s how we felt

@Aimee3087 I’m also a solo female pet sitter, if I notice a listing where they’ve had multiple sitters who left no reviews, I won’t even apply at this point. In the past, these have been the sits I’ve had less than favorable experiences with, and I’ve come to believe that there’s a reason a sitter didn’t leave a review. On the other hand, I absolutely love pet sitting for new members, from my experience they are so excited and appreciative to be part of our group, and it’s my opportunity to welcome them and make a favorable impression on what THS is all about.

I have noticed that some people leave reviews on Trustpilot for sitters/HOs, rather than for the THS company itself. Here is an example from a few days ago - they may also put one on the THS website, but they may not and just assume that putting it on Trustpilot is enough!

I left a review for a sitter a few days ago, and immediately got an e-mail from THS asking me to review the company on Trustpilot (the “leave feedback” hyperlink goes to Trustpilot). The e-mail could be a lot clearer if THS really wanted people to review the company rather than the sitter/HO, but that would lead to more negative reviews, which THS doesn’t want, of course.

A few months ago I left a review of the company on TP after the 5-app limit debacle.

This was the e-mail 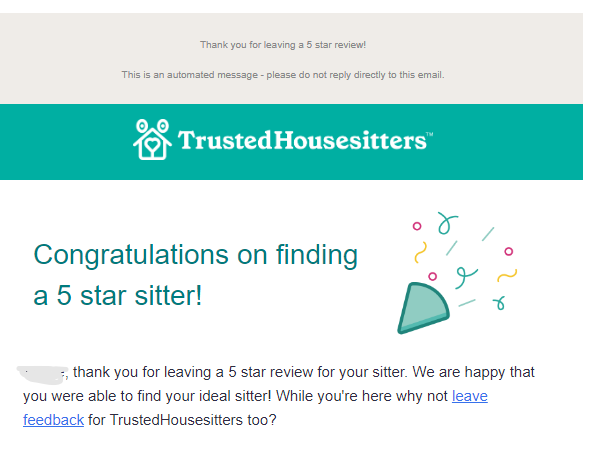 It is such a shame that a sitter cannot contact the previous sitters (likewise for homeowners to contact the previous homeowner) to ask questions that might be awkward. My biggest issue is damp and musty houses and many home owners get offended if you ask about this. Trip Advisor reviews are great for highlighting these issues in hotels and b&bs but I can understand that a housesitter may not want to mention this in their review.