I want to let you know about an app called Toilet Finder that locates the closest public toilet. My last HO told me about it. After I stopped laughing, I thanked him profusely. (There’s also another app called, Flush.)

I have used Google maps to find public toilets with mixed results. In Manchester, it took me on a long trek to Chinatown. When I got there, there was no toilet and I ended up buying an expensive meal to use the toilet. But yesterday I used Toilet Finder with great success!

Thanks for the info. Wish I would have had one of these apps while wandering around central London yesterday!

While living in Paris, I learned that department stores are a good place to go. As a bonus, Galeries Lafayette (one of the big department stores) has a fantastic view of Sacré Coeur from the women’s restroom. Most bars and cafés in France will allow people to use their toilet if they pay a token amount (1 euro) at the bar.

What a clever App. I didn’t know it existed. I’ll be sure to download one of them. I usually look for a coffee shop and have a coffee as payment for using the bathroom. I have on occasion also swanned into a hotel with a confident stride, like I am a guest, and used the bathroom that way.

Great word, Theresa, swanned! LOL So descriptive. Never heard that one before. I’ve also swanned into a hotel to use the lavatory.

We’ve used those apps to find a toilet, and Paris also has those sidewalk potties. Can’t really recommend them, but in an emergency, it’s ok.

. Always need to have a euro or local currency, because many have a small charge. Not so much with a pub or coffee shop, which is our favorite!! We became very efficient at finding them during our travels.

Thanks! I just downloaded Flush (had the most reviews). This is quite a public service. I salute you!

‘After I stopped laughing, I thanked him profusely.’ This made me chuckle! Just goes to show, there is an app for everything! Actually, these are a terrific idea and saves us nomads having to squat in a field (not that Mother nature would mind!)

We have used one of these apps for years and it has saved us many times! It even finds remote toilets in rest stops and parks when driving in rural areas of Australia.

Similar to @Therese-Moderator, when in the city I’ve confidently walked in to office buildings like I had an appointment, got in the lift, randomly chose a floor and got out and used the toilet that office workers and clients use. They are usually very clean. Often have used the toilet at a McDonalds without buying anything to eat but they are not always the cleanest. But if you are desperate…

Yes! I use that app (actually just the website) as well as https://pee.place/en and I’ve also used Toilettes publiques à proximité | toilettespubliques.com when I was in France.

I forgot to mention the app I use is called Where is Public Toilet. I’ve only used it in Australia though. Will find out it’s usefulness in the UK in November!

Hi @Crookie. I will be interested in hearing how it does in the UK, as we’ll be there in late January. Do please keep us posted, won’t you?

I also found googling “public toilets” and the name of the city or area gives me suggestions. I think I’ve also tried LooFinder app.

Hi @Crookie, is that the National Public Toilet Map app by the Australian Government? If so, I can’t see it working in the UK.

Don’t think so @temba as it says you can locate over 280,000 toilets worldwide & you can switch between continent & world view. It’s no. 5 in this article 6 Best Apps to Find Public Restroom Near Me on Android and iOS - TechWiser

I will report back @Karen-Moderator from the UK!

An excellent topic!!!
I hate it when you ask where the toilet is in some cafes, to be given a very large key and directions of where to find it.
With my terrible sense of direction, I have ended up in some strange places

Hi, thanks for that, what a useful App!
When I searched for ‘toilet finder’ on my phone’s App store, the first App in the results was called ‘where have I been?’. It has nothing at all to do with toilets, so it did make me laugh! 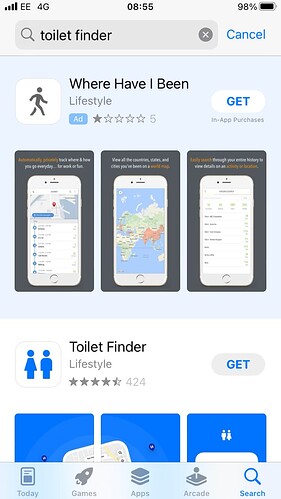