Statues Of Animals On Your Travels

During our travels we have sometimes come across statues of animals, sometimes in the most peculiar of places where you least expect to see them.

For example, the Statue of the Akita dog Hachikō which is located outside Shibuya Station in the heart of Tokyo. Hachikō would accompany his owner, Hidesaburō Ueno, a University Professor to the station every day and wait patiently outside for his masters return at the end of the day. Unfortunately one day near the University complex where the Professor worked he was knocked down in a road traffic accident and killed hence he never returned that day to Shibuya.
After the Professor’s death in 1925, Hachikō eventually settled with the University Professor’s former gardener Kikuzaburo Kobayashi. Kobayashi’s house was in Tomigaya which was close to Professor Ueno’s previous home and within walking distance of Shibuya, so the pup could easily make his daily walk to the station. He continued to do this for about 10 years, patiently waiting for Ueno to come home. 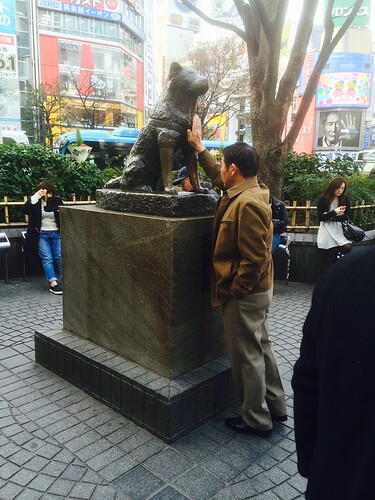 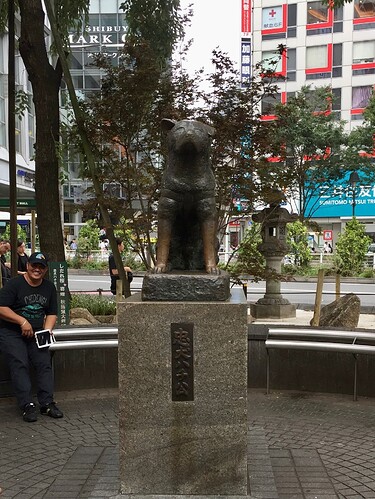 The photo below is my hubby John with a bear statue in Plitvice Lakes National Park which is the oldest and the largest National Park in the Republic of Croatia. 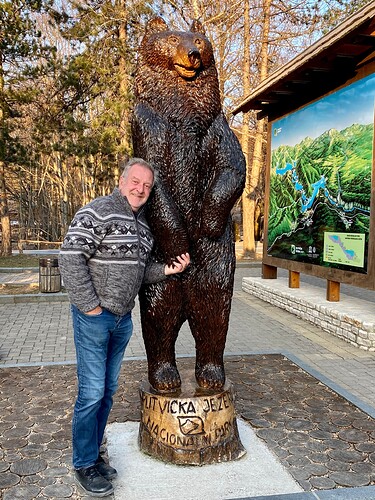 The photo below shows the Headington Shark which is located at 2 New High Street, Headington, Oxford, England. It is a rooftop sculpture depicting a large shark embedded head-first in the roof of a house. It was protest art, put up without permission and it first appeared on 9th August 1986, having been commissioned by the house’s owner Bill Heine, a local radio presenter. 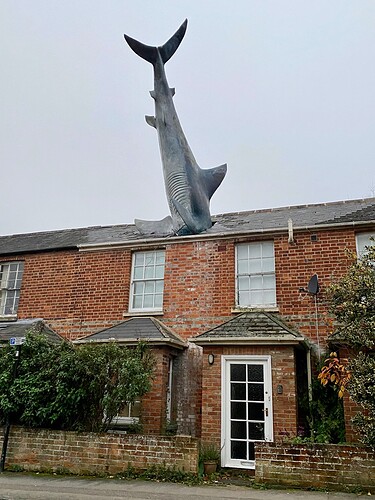 Does anyone else have any animal statues to add to the list?

Greyfriars Bobby was a terrier who became well known in 19th century Edinburgh. He spent 14 years guarding the grave of his dead owner in Greyfriars Kirkyard. 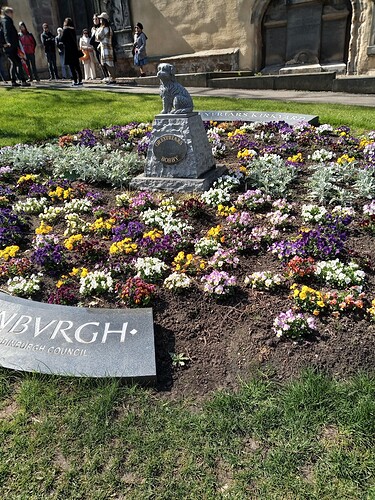 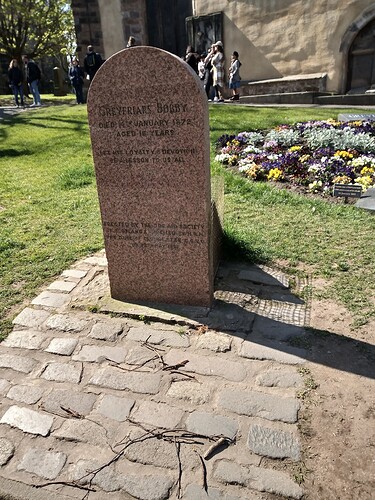 Some great ones in Endinburgh 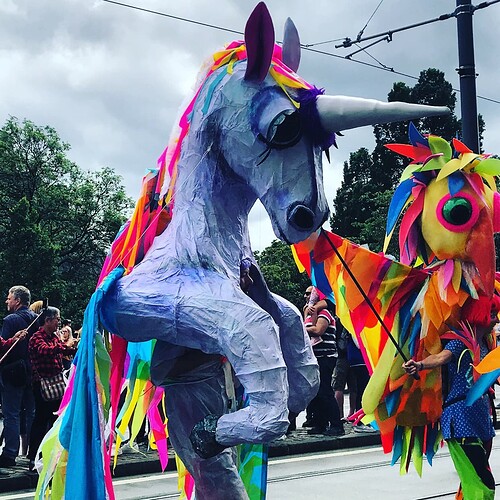 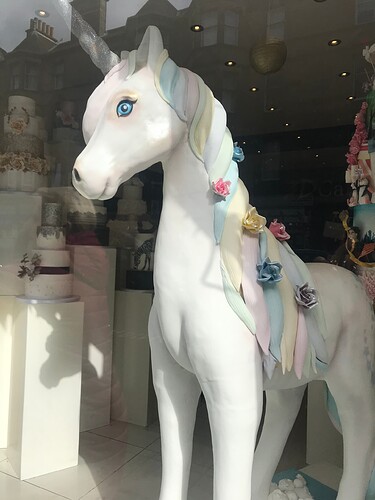 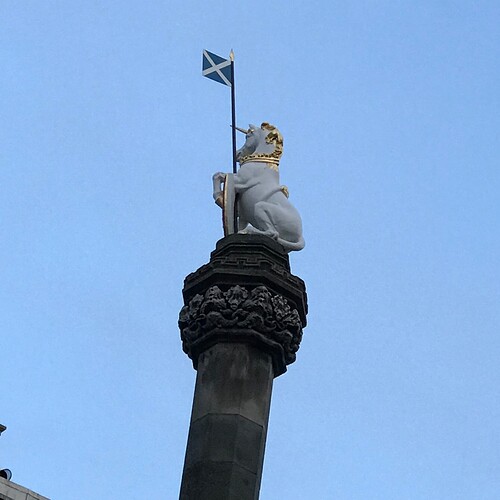 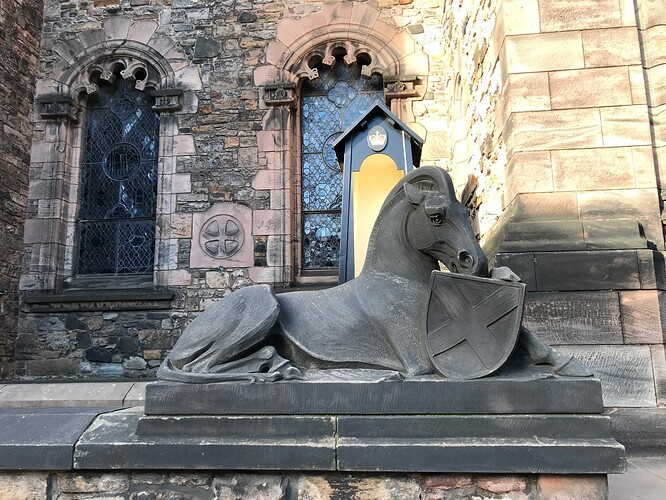 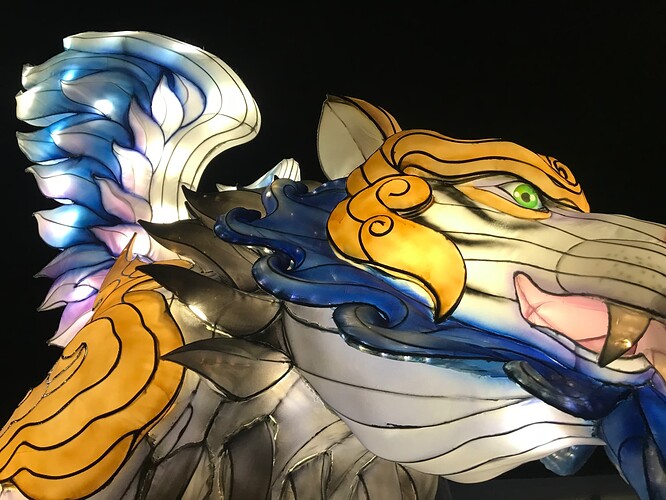 You know what they say Sam,
Family first

Happy to assist @Samox24, @Debbie & @Amparo: we were sitting in Edinburgh in May and in July (our charge was a really photogenic chap too!) 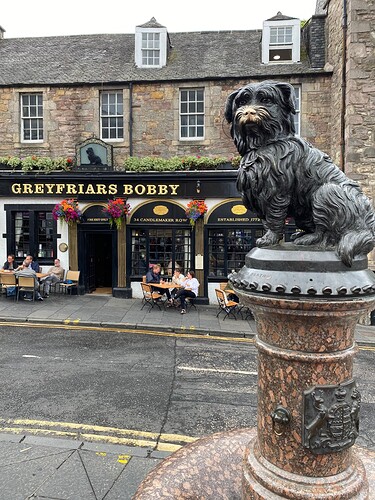 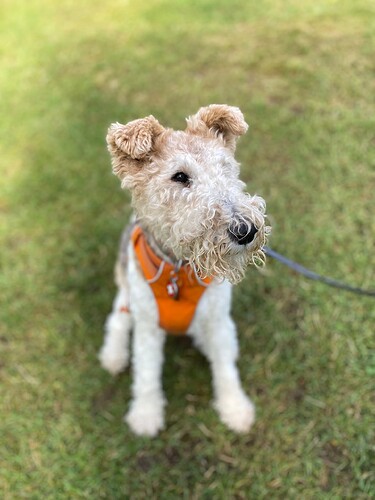 ‘‘Just Nuisance’’, a Great Dane, is the only dog to have ever served in the Royal Navy.
His bronze statue can be seen in Simon’s Town in South Africa, which is where the main navel base is. It is in the main square called Jubilee Square. It’s such a lovely story. 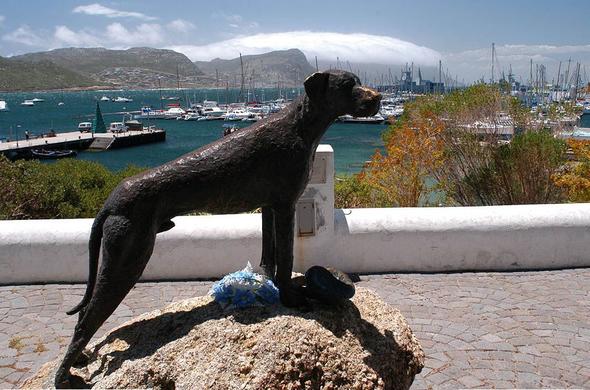 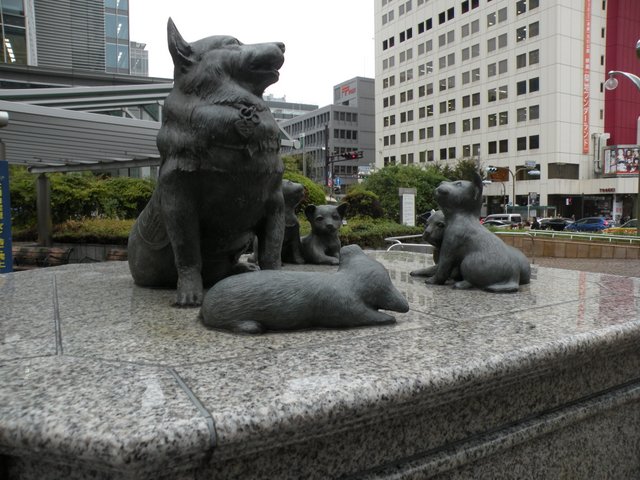 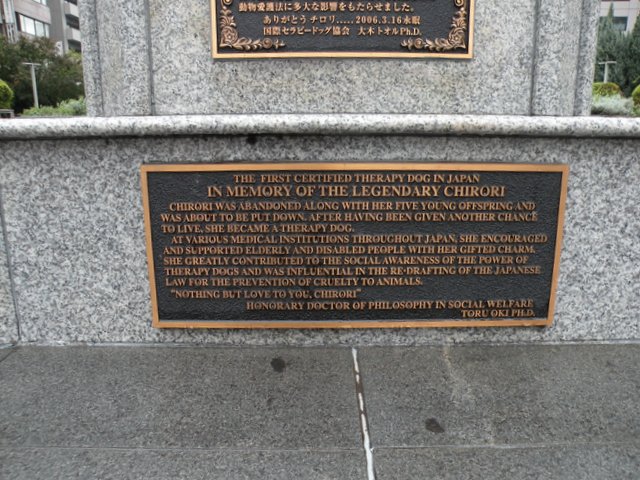 Less known than Hachiko but in Tokyo too 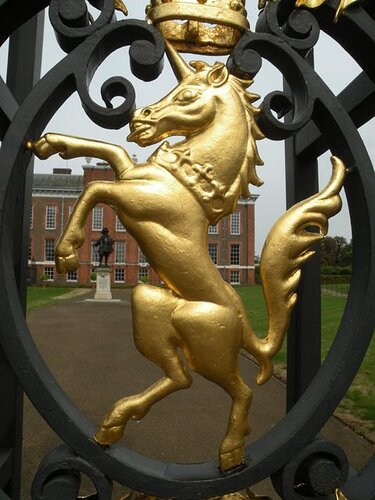 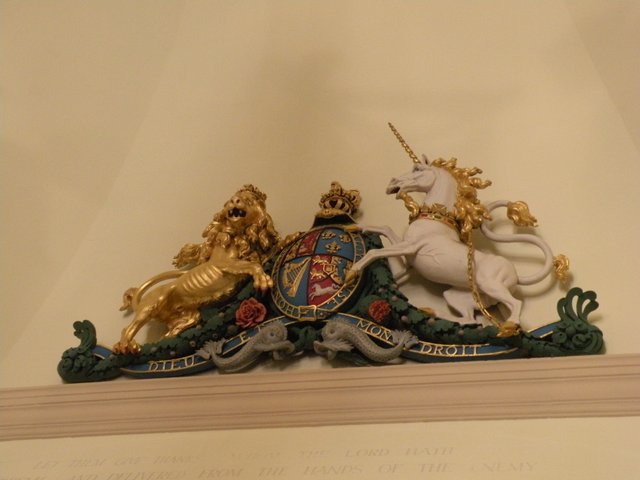 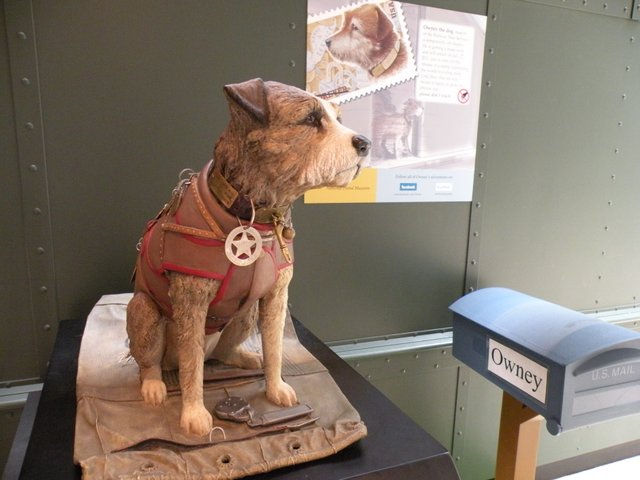 “Owney was a scruffy mutt who became a regular fixture at the Albany, New York, post office in 1888. His owner was likely a postal clerk who let the dog walk him to work. Owney began to ride with the bags on Railway Post Office (RPO) train cars across the state . . . and then the country! The RPO clerks adopted Owney as their unofficial mascot, marking his travels by placing medals and tags from his stops on his collar.f”

Oh thou warmeth my heart!
I know exactly where that is! 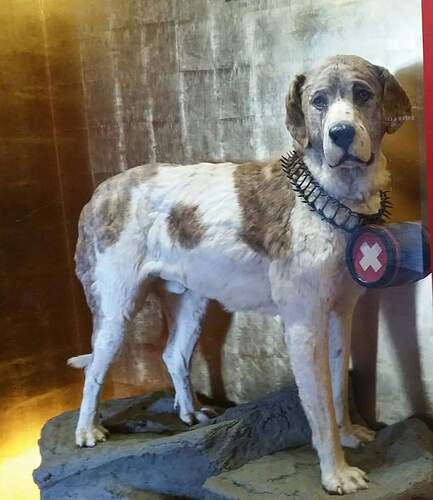 Since we’re doing stuffed too.
BARRY a barrel-wearing St Bernard who saved 40 lives as a mountain rescue dog

Barry retired to Bern after his death his body was passed into the care of the Natural History Museum of Bern. 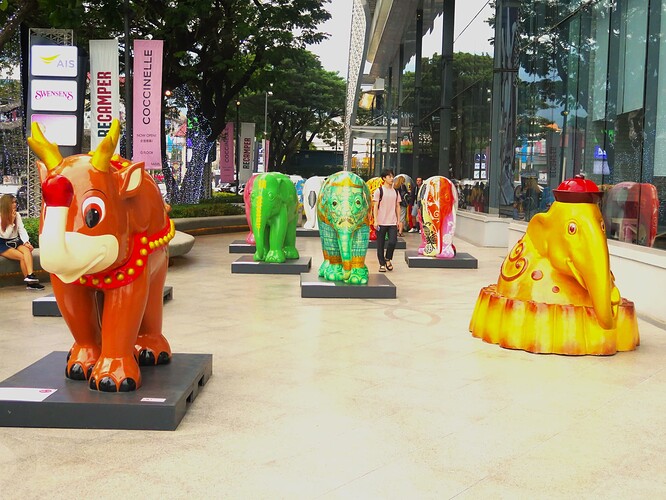 A bunch
A cow at God’s Own Junkyard in Walthamstow, London - the junkyard is open weekends only. 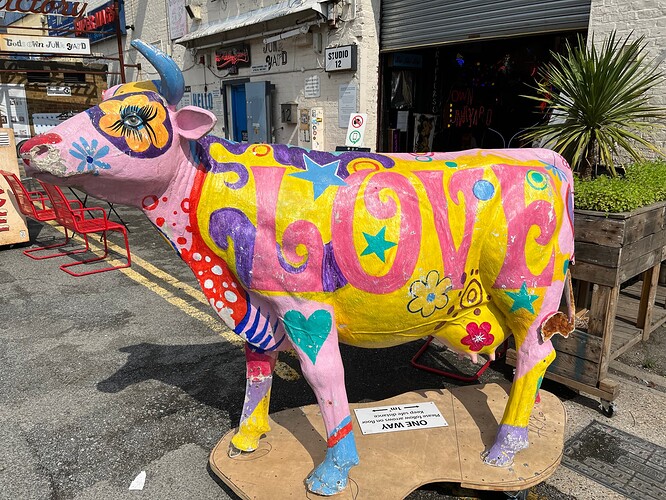 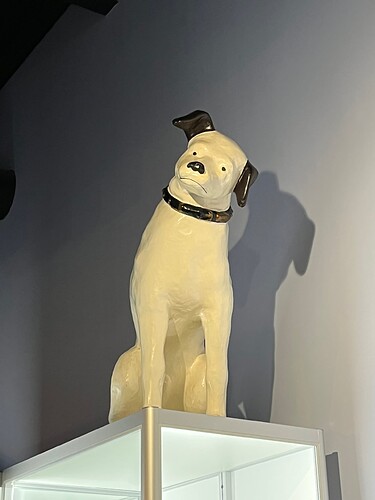 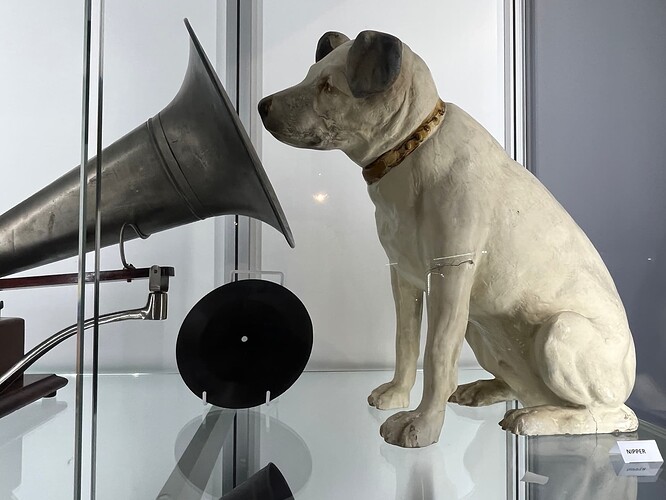 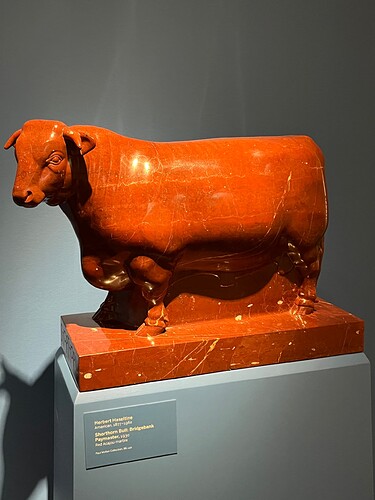 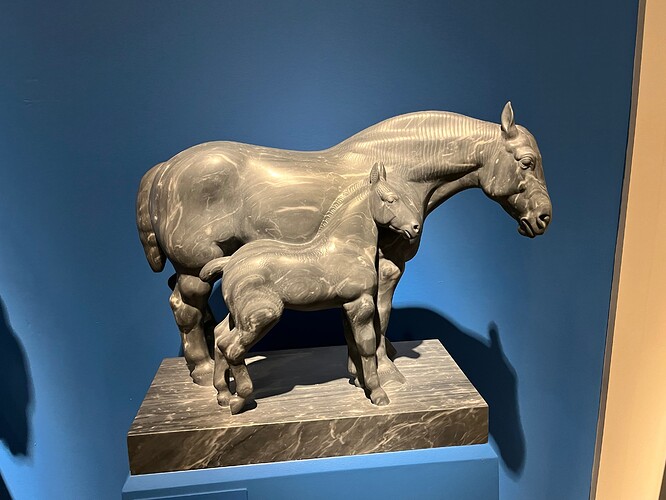 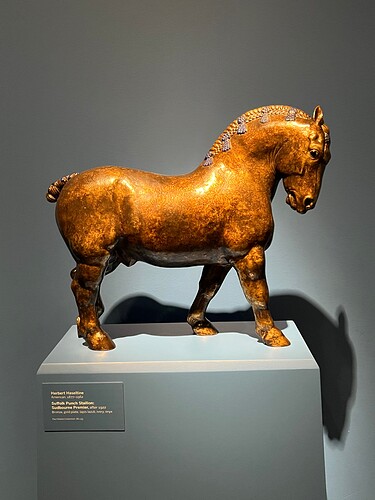 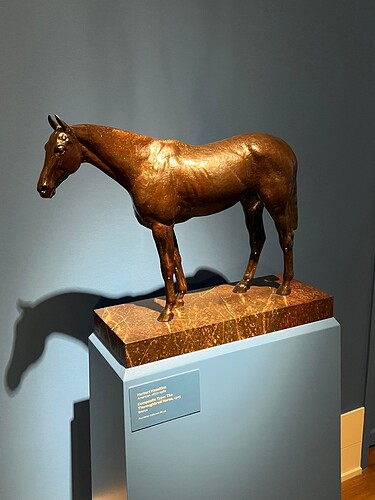 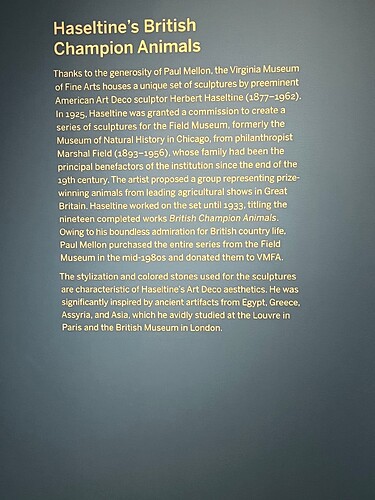